As writing goes, recreating the experiences one has had on a trip abroad has got to be one of the more difficult pieces to pen. Add 9 orphanages to the mix and that just magnifies the difficulty in writing about the experience; however, I’d like to give it a try. I promise to keep it fairly short and hopefully entertaining… and chalk full of beauty because, well… that’s just what the trip exemplified… beauty.

Carrying the name of Hopehouse International, the nearly 25 person group began its journey at Nashville International. Our group was diverse… spanning several states in the Southeast; therefore, many of us had absolutely no clue who was part of the group or not. I started scoping out these yellow luggage tags that we all had on our carry-on’s and thus recognizing the people I’d spend the next few weeks with. 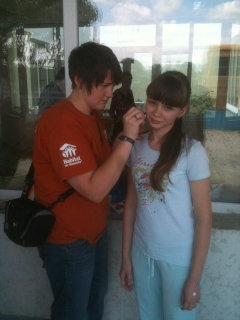 I went with the notion that my sole duty would be to paint the faces of Ukrainian orphans. If you’ve spent any great amount of time with me, you may know that I don’t claim, have never claimed, and will never claim art as a forte…much less covering the faces of these precious (unfortunate) children with my less-than-expert handiwork. I can’t say that my face painting skills have been perfected in any possible way, but I will say that I secretly think I was given the best task out of the many hats that our team wore. More to come on that in a minute.

Our team graced the halls of the Philadelphia airport where I was particularly delighted to study an ornithology exhibit displayed on the concourse. Then on to the dreadfully long red-eye flight to Frankfurt where we sleepily and hastily drank coffee before boarding the flight to Kiev, Ukraine. After retrieving luggage in Kiev, we boarded a bus en route to Odessa, a city on the coast which was 8 hours away. As we drove through Kiev, I observed the dilapidated apartments which had been allotted to families during the communist regime’s power. The Iron Curtain had left its mark on the former breadbasket of Europe and the repercussions of a generation broken by war and communism still rang out even two decades later.

We arrived to the ship at nearly midnight and were greeted by a friendly staff and hardy food. Having traveled for nearly 30 hours, we were exhausted and definitely looked so, and I mean that in the kindest sense. The next morning we visited our first orphanage really having no idea what we were doing and yet the cohesion that we needed as a group to love the children was clearly present. It was beautiful. They were beautiful. As I said earlier, I was given the task of face-painting, which quickly became a joy and not a task. I had hastily learned some Russian and was able to roughly communicate with the children… the little boys undoubtedly wanted Spiderman on their faces while the girls choices were more diverse. As I began face-painting, I was able to touch the kids faces and talk to them. It is rare that they are loved on and made to feel beautiful because there are often simply to many of them for the orphanage workers to tend to. I prayed for them as I painted their faces… most of them looked down, but I caught their gaze and looked into their eyes. I wanted them to know how beautiful they were. I wanted them to know how important they were. I wanted them to know they mattered. I was fortunate enough to have been told these things growing up… they are not. In fact, the statistics of the plight of orphans after they leave the orphanage at age 17 are bleak. Having insufficient education and virtually no networking prospects, most will end up in prison, trafficking, homeless, or having committed suicide.

But I serve and love a God that doesn’t give a flip about statistics. A God who says these children matter…they are mine and I love them. So Kate… you need to love them. Because they matter to me. This is what I slowly but surely learned as we went to orphanage after orphanage, city after city. It is clear to me why scripture is very explicit about taking care of the orphans and widows. Because they matter.

I came into this whole experience in Ukraine thinking that I could bring nothing of significance, but praying that somehow I could love a few kids and maybe be changed along the way. I left having learned what Christ looks like in the faces of all the healthy, sick, handicapped, tall, short, sad, and happy orphans I touched. I will never forget the girls faces I was able to paint, the young faces but old eyes… I pray one day they will change their worlds… that they will not be trafficked into a life of rape and inhumanity. That they will come to know the grace of Christ because grace is such a foreign thing them.

As we worked through the week, we gave relief items, we gave hugs, we gave love in many ways, but yet I wondered if it was enough. I was reminded that we can’t do everything but we can do something… so I need to spend my days doing something that matters.