Last week concluded the 2013 Festival of Homiletics; I blogged about first half of the Festival here and now, I’d like to wrap up the Fesitval. As an introvert, I am spending much-needed alone time today processing through my notes from challenging sermons and lectures. Here I will give a summary of the lectures and sermons; I hope to sit with much of what I learned, continuing to elaborate on it with further future posts. I know that something in me changed during this week and now I begin the hard work of figuring out what that exactly means.

On Wednesday, Will Willemon (Professor of the Practice of Christian Ministry at Duke Divinity and Bishop in the United Methodist Church) spoke on our God who is in constant motion, who is relentlessly self-revealing. Willemon focused on the idea that Jesus never really grew up, never matured into the calmer, more middle-aged man who would have been more king-like. How come he couldn’t settle into the God the Jews were expecting? He was a futurist, who balked at tradition, and was criticized for not keeping the Sabbath. Radically different, he continually pushed the envelope and in him the fullness of God was pleased to dwell.

Thursday, Rev. Nadia Bolz-Weber (Founding ELCA Pastor of House for All Sinners and Saints, Denver, CO) led us in a healing service that I will not soon forget.

Out of all the preachers who led us at the Festival, I was most excited to sit under Nadia. Heavily tattooed and quite tall, she does not necessarily come across as a Lutheran pastor, but a pastor she is, and a very, very Lutheran one. She led us through confession and absolution, then sang “Come, Thou Fount of Every Blessing” with us, then onto the Gospel Acclamation from Mark 7:31-37.

31 Jesus left Tyre and went up to Sidon before going back to the Sea of Galilee and the region of the Ten Towns.[a] 32 A deaf man with a speech impediment was brought to him, and the people begged Jesus to lay his hands on the man to heal him.

33 Jesus led him away from the crowd so they could be alone. He put his fingers into the man’s ears. Then, spitting on his own fingers, he touched the man’s tongue. 34 Looking up to heaven, he sighed and said, “Ephphatha,” which means, “Be opened!” 35 Instantly the man could hear perfectly, and his tongue was freed so he could speak plainly!

36 Jesus told the crowd not to tell anyone, but the more he told them not to, the more they spread the news. 37 They were completely amazed and said again and again, “Everything he does is wonderful. He even makes the deaf to hear and gives speech to those who cannot speak.”

Rev. Nadia began with discussing the fact that at one time in history, Martha’s Vineyard was a bi-lingual community due to the fact that 25% of its residents were hearing impaired. Deafness was viewed as a trait and not a disability. In the Gospel text, the deaf man’s friends brought him to Jesus to be healed, but the text says nothing about if the deaf man actually wanted to be healed. His friends obviously thought he was broken, but what if he viewed his deafness as a trait, like blond hair or hazel eyes, and not an impairment? If Jesus had shown up at Martha’s Vineyard, would the collective “they” have brought Jesus this deaf man to heal? Probably not. She then suggested that we often are quick to recognize and want to fix the brokenness in others, so that we don’t have to see it in ourselves. We are never ourselves, the broken people. Until Jesus shows up.

You can read her entire sermon here. I highly recommend it.

After she concluded her sermon, she gave a lecture later that day. Her lecture was geared towards advice and encouragement for the many clergy present. She spoke about how when she writes a sermon, it is always after she has been wrestling with the gospel text of that week, and how she almost always walks away with a limp. She will not walk away from the text until she has demanded a blessing for her people. It is a costly thing to be a pastor. Saying one of the most profound statements I’ve ever heard, she said: “I try to preach from my scars and not my wounds.” Can we all not take a lesson from this? 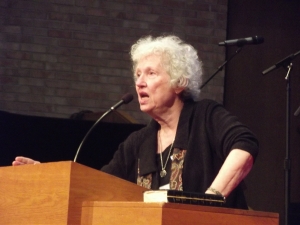 She began her lecture showing us the temporary tattoo Nadia had given her that morning. She essentially gave us an interim report on Emergence Christianity and set the stage for our modern-day Martin Luther to speak, Brian McLaren. Phyllis didn’t need any notes. She was full of information, of rich Church history, and she was as snarky as always. She has recently announced her retirement and so, she let us know that she no longer has a filter because she’s no longer worried about employment. Her talk was amazing and I can’t begin to do it justice here. I’ll briefly say that she spoke on the shift that is occurring in the church today and likened it to the Protestant Reformation led by Martin Luther, as the Protestant church was formed as a break off from Catholicism. The Emergent Church is the same to Protestantism as Protestantism was to the Roman Catholic Church 500 years ago. God is doing a new thing among us and it will look much different than the church you and I grew up in and around. Sola Scriptura (Scripture alone), she said, is indeed dead. The canon is being reconsidered.

She ended and received a standing ovation. Coming back to the microphone, she said to the clergy: “I do not envy you, but I pray for you my brothers and sisters.”

I have ordered her book, so expect more blog posts about this.

Tickle set the stage for the final speaker, Brian McLaren (Pastor and leader of Emergence Christianity; Time magazine listed him as one of the twenty-five most influential evangelicals in America). 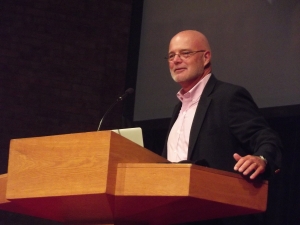 He spoke on the shift of Christianity in America. This new movement no longer wants to find itself identified by hostility. He referred to Anne Rice who, in name of Christ, quit Christianity, stating she no longer wanted to be a part of a religion which requires her to be hostile. The church has historically been based upon a strong, hostile identity, saying things like: “you are going to hell if you don’t agree,” “we are God’s chosen,” “You worship false gods,” and “we possess the only absolute truth.” “Give people a common enemy and you will give them a common identity. Deprive them of an enemy, and you will deprive them of the crutch by which they know they are.” [James Alison] The backlash to this strong, hostile faith was a weak, benign faith which said: “it doesn’t matter what you believe.”

Is it possible to rebuild a Christian faith, identity, and ethos without hostility to the other?

We’ll discuss this in detail in future posts and you are welcome to discuss it here in the comments. I am grateful for this Festival from which I was greatly encouraged, but also heard some uncomfortable teachings. I am learning to sit with the hard things and let the Spirit change me.

The Festival of Homiletics (Preaching) kicked off with a beautiful start on Monday; I’ve been volunteering at the Festival and so I got to greet most folks as they registered on Monday. I was and am exhausted from a nonstop graduation weekend, but I absolutely enjoyed welcoming clergy and lay folk from multiple traditions. I heard stories, I shook hands, and I smiled. It was the most extroverted thing I’ve done in a while, but very rewarding. I’d like to recap a few things I’ve heard from the inspired and spirit-filled teaching which has been going on nonstop since Monday. Forgive me for being rather succinct, I have little energy for elaboration but wanted to write nonetheless.

I believe in writing about beauty. So here we go.

Worship Monday night was conducted by First Baptist Nashville, a congregation which has graciously hosted the festival. The worship had a distinctly Baptist flair until the first preacher of the Festival, Dr. Walter Brueggemann (Professor emeritus of Old Testament at Columbia Theological Seminary and distinguished author) incorporated “shit” into his very theologically sound and meaningful sermon.

Following Bruggemann, Barbara Brown Taylor (Priest in the Episcopalian Diocese of Atlanta, Professor at Columbia Theological Seminary, and NY Times best selling author) preached a sermon like I’ve never heard one before; she is a gifted writer and pastor. What a privilege to learn from her.

Taylor hypothesized that perhaps living in the spiritual dark is not a bad thing, though it is often associated with evil or godlessness. She suggested that perhaps it is time to leave a faith which is maintained in a full solar tradition because God does some of God’s best work in the dark. Day and night do not contradict each other, but rather, they complement each other; so walking in times of darkness and disillusionment are essential to one’s faith, for this is where one learns to walk by faith, when one cannot see the way.

Today (Tuesday) I was in and out of another commitment (a panel I was on discussing Millennials in the church), but I did get to hear a couple of speakers. Lillian Daniel (Senior Minister at First Congregational Church in Glen Elynn, IL) spoke on the idea that sometimes there is a power at work within us that enables us to accomplish infinitely more than we could imagine.

Then I heard Dr. Barbara Lundblad (Lutheran Pastor and Professor of Preaching at Union Theological Seminary), for which I will always be grateful. She is an aging woman with more wisdom than I could ever hope to attain and yet a humility which enables her to drives her points home in a relatable way. She spoke on the four Sundays of Advent (2013), which all come from the book of Isaiah. Specifically, she drove home the point timw after time that to do our preaching is to make hope as tangible as despair, and if we cannot help people see a tangible sign of hope, we will all give into despair.

Well, that’s all folks. I’m signing off. Looking forward to a wonderful continued week of homiletics!

Next Monday, Nashville will welcome the Festival of Homiletics! The Festival is a week long conference which invites and presents outstanding preachers and professors of homiletics. There will be many pastors who attend to be rejuvenated by other pastors, while engaging in beneficial discourse centered around preaching and ministry. This year the Festival is welcoming Nadia Bolz-Weber, Brian McLaren, Barbara Brown Taylor, Walter Brueggemann, Diana Butler Bass, Lauren Winner, Eric Elnes, Grace Imathiu, Phyllis Tickle, Otis Moss III, and several others. The preachers/professors/pastors are a diverse group of folk, which I’ve come to believe is incredibly healthy and beautiful.

I will be volunteering/ attending the Festival next week while tending to other commitments as well. I’m excited to be challenged, refreshed, and reminded about the strength we have in diversity. Check in to the blog as I will try to post frequently about that which I encounter each day!